AND THEY DID IT! 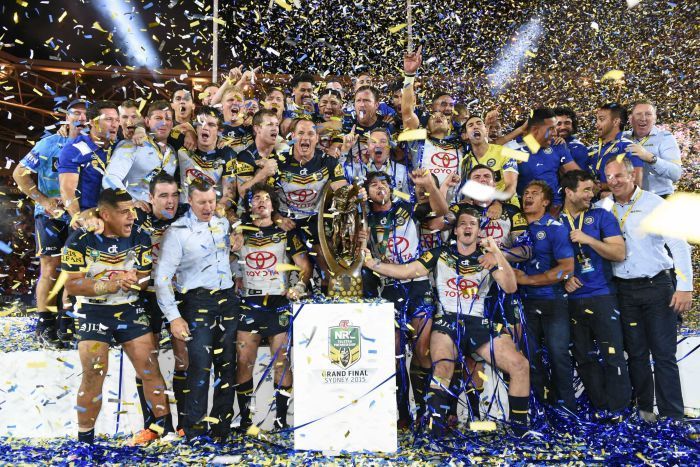 The North Queensland Cowboys have won their first NRL title after Johnathan Thurston kicked a golden-point field goal to beat the Brisbane Broncos 17-16 in a thrilling grand final at the Sydney Olympic stadium.

The Cowboys trailed 16-12 for most of the second half before winger Kyle Feldt scored in the corner in the final seconds to take the game into golden-point extra-time.

Broncos half-back Ben Hunt dropped the ball from the extra-time kick-off to give the Cowboys a golden opportunity to snatch victory.

Thurston was set up for the field goal for the first tackle. He was swamped by the Broncos defence but could not be stopped from his second attempt moments later after a strong hit-up from prop James Tamou.

From 20 metres out, Thurston kicked the winning field goal in the 83rd minute of the game to send all of North Queensland into a celebration frenzy.

Thurston went on to win the Clive Churchill Medal for the best player in the grand final.

Immediately after the dramatic win Thurston was shaking and in disbelief over what he had achieved for the club he loves dearly.

"I am speechless, I can't believe it," he told Channel Nine after the match.

"I can't believe what I have just done. I love these boys, they have worked so hard. They work so hard, I see them every day, the sacrifices that they make, what they do for us every day. I love the club. Wow, I can't believe it."