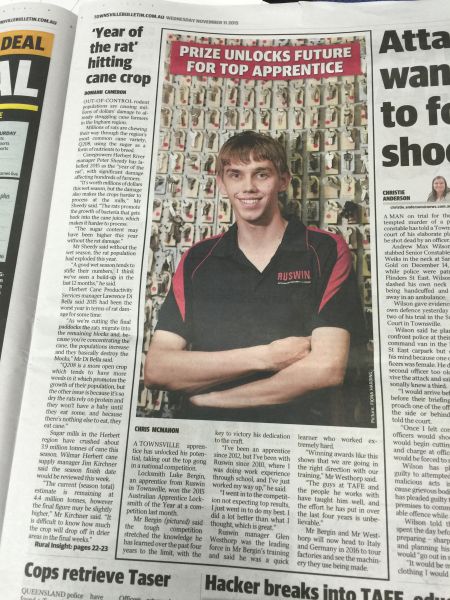 A Townsville Apprentice has unlocked his potential, taking out the top gong in a national competition. Locksmith Luke Bergin, an apprentice with Ruswin in Townsville, won the 2015 Australian Apprentice Locksmith of the Year at a competion last month. Mr Bergin said the tough competition stretched the knowledge he has learned over the past four years to the limit, with the key to victory his dedication to the craft.

"I've been an apprentice since 2012 but I've been with Ruswin since 2010, where I was doing work experience through school and I've just worked my way up"  he said. "I went into the competition not expecting top results. I just went in to do my best. I did a lot better than I thought, which is great"

Ruswin manager Glen Westhorp was the leading force in Mr Bergin's training and said "He was a quick leaner who worked extremly hard. Winning awards like this shows that we are going in the right directon with our training. The guys at TAFE and the people he works with have taught him well, and the effort he has put in over the last four years is unbelievable"

Mr Bergin and Mr Westhorp will now head to Italy and Germany in 2016 to tour factories and see machinery they use being made.